Friday evening, I caught what I estimate to be a bass in the 12-13 pound range (lake 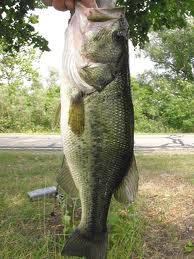 record), plus 2 others over 10 lbs.  Saturday (early morning, and late afternoon), I caught FIVE FISH OVER 10 POUNDS, plus quite a few in the 3-7 pound range; and pulled-out about 40 fish in the 1 pound range (per biologist recommendations). I have never heard of anyone having that kind of fishing in one day… anywhere!! All fish were in beautiful shape… fat and healthy with no scars or visible physical problems.

On a small lake nestled deep in a canyon of oak and mesquite just south of here, the dark, often placid waters have become a dream come true for rancher Bud Dearing. Largemouth bass have grown to trophy proportions in an almost unbelievably short period of time, and Dearing says the credit goes to a Arms Fish Farm 100 miles away.

“I’ve always dreamed of having a lake like this, one full of big bass, and I’ll be the first to tell you that Arms Fish Farm is the one that has made it come true,” Dearing said. “They told me to do two things and it would work. They told me: ‘No. 1: Listen to what we say, and No. 2: Do what we say.’ I did, and here’s the result.” That result, Dearing said, is his 12 1/2-acre lake full of trophy largemouth bass. The fish have grown to 10 pounds or larger in just over five years amid a haven of forage fish so plentiful that for a bass, swimming from one end of Dearing’s lake to the other would be like a person walking through the food section of a grocery store and having the opportunity to eat everything in stock.

Many other private pond owners across the state have echoed Dearing’s appreciation for Arms, who at age 11 began seining the Leon River near his family’s Dublin home and selling carp and minnows as trotline bait to help make money during severe droughts of the 1950s that had ruined his father’s peanut crops.  Now, with 47 years of experience in fish management, Arms owns the Arms Fish Farm in Proctor, about 20 miles southwest of Stephenville. The private fish hatchery and fish management facility provides bait fish and game fish to private lake and pond owners, electroshocking sampling to determine fish populations and size structures, and aquatic vegetation control.

“I’ve got a formula that I developed that works every time,” Arms said last week from his hatchery, where a plaque made by Dearing hangs on his office wall. Dearing sent the plaque to Arms last year.  On it, Dearing listed Arms’ No. 1 and No. 2 steps to producing big bass. They are accompanied by pictures of trophy bass Dearing’s lake has produced under Arms’ guidelines of stocking Florida strain largemouth bass and lots of forage fish. “Those pictures were the result of 4 1/2 years of management and they include a lot of bass that weigh from 6 to 9 pounds,” Arms said.  “His bass now are almost 6 years old, and he should be catching some 10-12-pounders.  And it wouldn’t surprise me if someone doesn’t catch a 15-pounder out of his lake any day.”

How did Dearing’s bass grow so fast in such a short period of time, considering the current Texas record bass for public waters is an 18.18-pounder that was 10 years old? “The key is food, food, food,” Arms said.  “Genetics only allow you to grow big bass. What grows big bass is food, food, food. The genes won’t come into play unless there is an ample food supply.” Sitting in an antique, slope-sided Skeeter boat and surrounded by flooded timber on his private lake last week, Dearing held a 7 1/2-pounder that had just been caught on a soft plastic worm. It was 3:45 p.m., and the fish was among 15 that had been caught within one hour of fishing and among 30 that would be caught that afternoon.

“Let’s go over to the dock, and I’ll throw out some feed for the bluegills,” Dearing said. “I’ve got them trained to coming to the feed, and they are what growing big bass is all about. There are a lot of really big bluegills here, and a lot of smaller ones, too, and that’s what you want — food for bass of all sizes.”  Using floating fish food pellets, Dearing tossed several handfuls onto the surface. Within seconds, the surface began to boil as coppernose bluegills weighing a half-pound or more gulped down the food.  Occasionally, a big largemouth bass made a huge “swoooosh!” at the surface as it picked off one of the larger bluegills. “I’ve got a good variety of food for the bass,” Dearing said, “and I think that’s very important. You just can’t have too much food for them.” Dearing’s lake is exceptional in many ways.

Because it was built in a canyon, its maximum depth when full is 40 feet, deeper than many large public reservoirs. Also, it is loaded with submerged timber, and aquatic vegetation is limited because of the depth and the fact that Dearing periodically adds fertilizer to the water, causing plankton growth that helps block sunlight from the plants. “The main thing we did with Bud’s lake when we started was to be sure it started with a good food chain,” Arms said. “We put [coppernose] bluegill that were three inches in size or better that could spawn quicker [than smaller bluegills]. We also put redear sunfish in to control the yellow grubs [parasites on game fish], and we put in golden shiners and fathead minnows. “We let the baitfish stay there for about one year before stocking largemouth bass,” Arms added, “We stocked about 25 bass per acre.

Since then, he started having a problem with small bass, so I told him to remove all of the little bass he could. The little bass will eat up all of the food fish, and the big bass won’t have anything to feed on. He didn’t have a weed problem because the water is deep and he fertilizes the lake religiously. If you can control the weeds and the little bass, the lake will be good for you forever.”  Dearing said the removal of the smaller bass is essential in producing big bass. “Every bass we catch that is under 17 inches in length is taken out,” Dearing said.  “That way, you don’t have as much competition for the baitfish.

My goal is to see a bass caught out of my lake that is 13 pounds or larger and can be entered in the [Texas Parks and Wildlife Department] ShareLunker program.” With the table already set, Arms believes it’s just a matter of time before that happens.